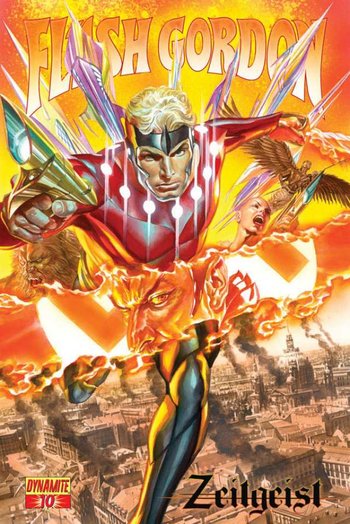 Flash Gordon: Zeitgeist is a Comic Book adaptation of the Flash Gordon franchise. Set before World War II at the time the comics were originally written and taking elements from most of the various versions of Flash out there, it's a tribute to all iterations of Flash Gordon while employing new twists and turns.
Advertisement:

The year is 1934, a time of two-fisted swashbuckling, of fearsome threats and wild adventure-and of ever-growing threats on the horizon.

Three valiant humans — Flash Gordon, Dale Arden and Dr. Hans Zarkov — are plucked from the Earth, traveling to the distant planet Mongo. Their exploits are legendary, battling the machinations and terror schemes of the dreaded emperor Ming, the All-Seeing Ruler of Mongo. But they did not fight alone...