Western Animation / Defenders of the Earth 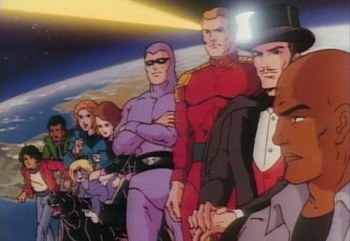 Suspiciously similar to, yet not the same as, The Defenders.
Advertisement:

Defenders of the Earth was a 1986 animated television show, jointly produced by Marvel Productions and King Features Syndicate. Set in the year 2015, it starred characters from three classic King Features series — Flash Gordon, The Phantom, Mandrake the Magician, and Mandrake's long-time friend Lothar — as they teamed up to battle the evil machinations of Flash's alien Arch-Enemy, Ming the Merciless. The Defenders were helped by their teenage children: Rick Gordon (son of Flash), Jedda Walker (daughter of the Phantom), Kshin (adopted son of Mandrake), and L.J. (son of Lothar).

The show ran for a single syndicated season of 65 episodes, and had a brief four-issue comic-book series published by Marvel Comics under their "Star Comics" imprint.

The theme song's lyrics were written by Stan Lee, of all people.

Defenders of the Tropes:

Mandrake: Inn keeper? Do you have lodgings for two more guests?
Feedback