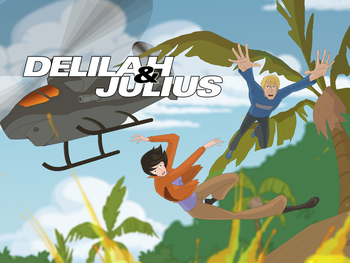 "Once upon a time, there were two orphans, a boy and a girl left to fend off the world all on their own... Until I took them in. I'm Al. I run the Academy, a training ground for boys and girls of, um... unique talents. So now they have me, and each other, and it's cool. They're growin' up fast, real fast. He's a prize-winning surfer, a poet, and an expert safecracker. She knows fencing, etiquette, and explosives. They're masters of disguise, martial arts experts, and fluent in 20 languages. They're Delilah and Julius, and they're saving the world — one crime at a time, baby."
— Opening Narration
Advertisement:

Delilah & Julius is a Canadian Animated Series about two young orphaned spies who fight international crime while training at the Academy, a secret Spy School. Trained by the mysterious 'Al' who is the director of the academy, they fight an assorted network of supervillains who have various plots to take over the world. Delilah Devonshire (voice of Marieve Herington) and her partner Julius Chevalier (voice of Fab Filippo) are polar opposites; she is very goal-oriented and Women Are Wiser while he is laidback, Hot-Blooded and more spontaneous. However, they are also the best operatives in the academy.

Created by Suzanne Chapman and Steven JP Comeau and produced by Decode Entertainment (now part of WildBrain), the series originally aired on Teletoon from 2005 to 2008 for a total of 52 episodes spread out over 2 seasons. The show proved to be among the network's highest-rated series of the time, with its spy-themed action and intrigue appealing to kids and adults alike.

"Sorry about that, sleeping beauty--minor turbulence."

"Sorry about that, sleeping beauty--minor turbulence."