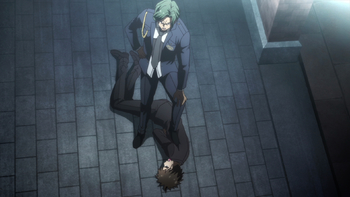 Hope's Peak Academy's very firm on their policies. Even if it means that they have to abuse a Reserve Course student to keep their secrets.

When a school is used as the cover for an elaborate plot-centric scheme, usually by a Big Bad or Mad Scientist. This is popular in horror or science fiction, where the story will centre on aliens, witchcraft or other supernatural activity secretly taking place at the school. Often involves brainwashing or forced servitude of the students, or illicit scientific testing being conducted on the students. Spoilers follow, as the True Purpose of the schools is often not known until The Reveal.

The benevolent (mostly) version of this is an Extranormal Institute. Different from Boarding School of Horrors, because it's not a question of the facilities being bad or the teachers or other students being mean — usually everything is outwardly quite nice, because it makes a better contrast with the Terrible Lurking Secret. Do not confuse with a school that teaches you how to scheme, or a school that teaches you Scheme.