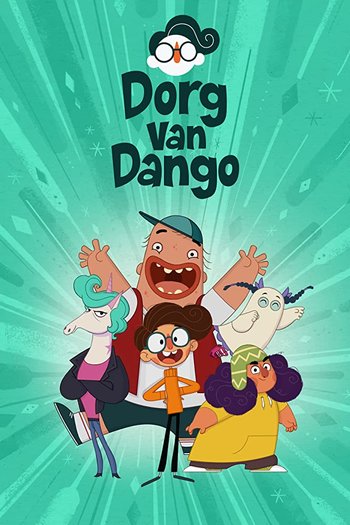 Dorg Van Dango - a normal kid in a normal town, until four magical beings ESCAPED from a top secret compound and CRASHED into his life! Disguising them as regular kids, Dorg's world is about to become WAY! MORE! MAGICAL!

So goes the Expository Theme Tune of this Irish-Canadian co-production by Cartoon Saloon and WildBrain. Dorg Van Dango is a thirteen-year-old boy who lives in the relatively quiet town of Normill. One day, his world is turned upside down by the arrival of four supernatural beings - unicorn Jet Lazor, amorphous alien RD, Bedsheet Ghost Yooki and inept witch Patronella - who have escaped from the government facility Area 52. Dorg immediately accepts them as his friends, dubbing them The Magicals and disguising them to blend in amongst humans, while also finding a secret hangout place under the mall for them to stay and him to meet them when no one's looking. And so, Dorg and his pals navigate all sorts of challenges, whether it be the Magicals trying to help Dorg solve his everyday problems or Dorg having to deal with the risk of his new buddies being exposed by mall owner Munch, as well as Dorg's own doting mother Fretta and annoying little sister Voulez.

The show debuted in Ireland on RTÉ in 2020, making its way to Family Channel (owned by WildBrain) in Canada and Nickelodeon everywhere else.