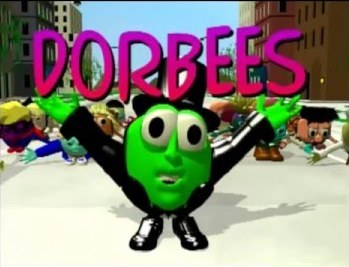 "Dorbees, everywhere I look I see Dorbees..."
In the beginning, God created the heavens and the Earth.
All that is seen and unseen.
And in the panorama that is the unseen,
Beyond the secret world of the insect,
Beyond the atoms that form the grass they hide behind,
In the infinitesimal pantheon that lurks beneath our feet and beats with hearts anew,
Live...the Dorbees!
— The introduction
Advertisement:

Dorbees: Making Decisions is an obscure 1998 Christian Direct to Video computer animated film created by Benjy Gaither and the Gaither Vocal Band, and produced by Benjy's studio Live Bait Productions. It mainly centers on two loosely-connected stories revolving around the titular "Dorbees": One about two children named Jack and Mary-Jane who ditch school to explore an old abandoned house, and the other about a vaguely Scandinavian immigrant named Otto trying to fit in with "the common folk" by going to a clothing store run by a 70's-obsessed Dorbee named "Dig". A third short revolving around a superhero duo named "Mr. Poe and Yogul" appears in-between the two.

Dorbees was intended to become a full series of tongue-in-cheek Christian cartoons in a similar vein to VeggieTales, but only one other installment began production before the whole concept was lost to Development Hel-er… Heaven. However, the film’s legacy was carried on somewhat by Gaither's Pond, a similarly Uncanny Valley direct-to-video Christian CGI cartoon series that first debuted the previous year and was also a Live Bait production.