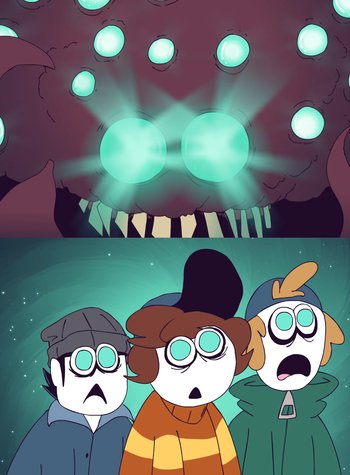 "Did you know that Changewing's can hypnotize their prey? Crazy, right?"
— Mirabel Madrigal, The Dragon and the Butterfly, "Chapter 66: Dragon Things Out"
Advertisement:

A Hypnotic Creature is a being capable of powerful hypnosis, telepathy, or any other method that does not involve biological invasion of some sort or does not come from the creature itself, such as a Mind-Control Device. Most importantly, the being itself isn't human, or even humanoid (that's a different trope). It may be some sort of Starfish Alien creature, or a bizarre alien animal or plant. It may not even be intelligent, for that matter, just running on instincts. Hypnotic Eyes or a Compelling Voice are a common feature.

Such creatures never have any sort of a civilization, and typically come from places where their hypnosis is much less effective. After all, if their mind control powers were 100% effective in their home environment, they would have conquered the universe already.

Alternative Title(s): All Glory To The Hypno Toad, The Hypnotoad