How Do You Say 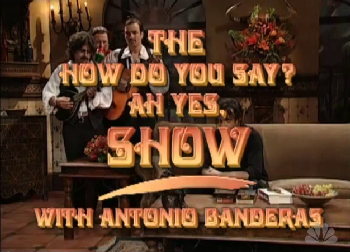 Saison Marguerite: [In a thick French accent] Eh, Brittany, do you have an extra, how you say, hair tie?
Brittany: Why do you say "how do you say" before words you CLEARLY know how to say?!
— The Most Popular Girls in School
Advertisement:

Pretty much a Stock Phrase for any Funny Foreigner. Commonly used either to hang a lampshade on how he doesn't speak English too well or with swearing to create a Sophisticated as Hell effect.

Ironically, it is usually used to show that the character isn't very fluent in English, but after the "How you say..." line, the character often uses an overly sophisticated sentencenote Originally it probably has to do with the fact that to a French speaker (and to some extent to speakers of other Romance languges) the words that will be most familiar in English are the ones that came from Norman and Latin, and that Anglophones consider more fancy.

Most frequently rendered as "how you say" instead of "how do you say" for added loose grasp on the language. Can lead to Buffy Speak. Another variant is to use it before an idiom, occasionally a... qu'est-ce qu'on dit... "Totally Radical" idiom. See Language Equals Thought if something along the lines of "my language, she has no word for this" comes up.

If the speaker is a Naive Newcomer or a Funny Foreigner, sometimes he or she will forego the "How do you say" part and just incorrectly use a stock phrase ("Time to let the butt be kicked!").

Alternative Title(s): How You Say