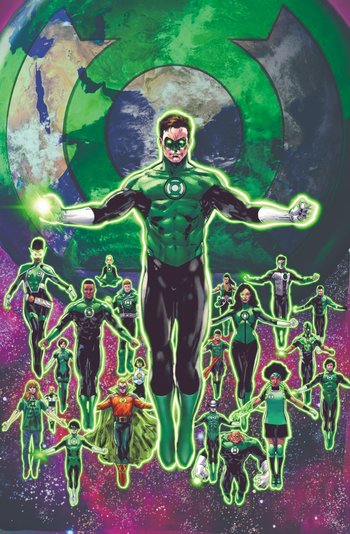 The Emerald Knights. The Ring-Slingers. The Cosmic Cops.

Outer space isn't as dark as you think.

Green Lantern is a DC Comics Superhero and one of the first to embrace the concept of a Legacy Character. Green Lantern has the unique ability to create objects out of solid green light, whose forms are limited only by the character's imagination. In addition, he can fire energy blasts, fly in deep space, generate force fields, and translate (almost) any alien language. All this is provided by a quasi-technological Power Ring, that must be recharged every 24 hours with a lantern-esque Power Battery. Oh, and it can't work on the color yellow (usually).

Created in 1940, the original Green Lantern was a railroad engineer named Alan Scott. The train he was traveling in wrecked when the bridge it was on collapsed due to sabotage. Alan was the only one who survived the wreck, thanks to the green lantern he was holding at the time. He fashioned his ring from a part of the lantern, which unknown to him at the time was constructed out of a magic metal made from a meteor that fell to Earth, later retconned into the Starheart.

Alan used his fists as often as he used his ring, and was more of a pulp hero than a sci-fi one. Along the way he picked up comic sidekick Doiby Dickles who accompanied him on his adventures, and he became one of the founding members of the Justice Society of America. Like most of the other DC characters of the time, he had adventures against regular criminals as well as super powered adversaries, and then his comic ended as super-heroes fell out of fashion in the late 40s. Alan was one of the mainstays of the All-American anthology series, as well as his own Green Lantern title. His solo series was cancelled in 1949, and his last Golden Age appearance was in issue 57 of All-Star comics in 1951.

However, in 1959, after the successful reinvention of the Flash, DC Comics revamped the title with a sci-fi bent, reimagining the hero as test pilot turned space cop Hal Jordan, who was given a Power Ring by a dying alien who crash landed on Earth (and was just one of many extraterrestrial peacekeepers serving the wise Guardians of the Universe). What most people know of the character originated during this era: the villainous Lantern renegade Sinestro, the living planet Mogo, alien drill instructor Kilowog (though those last two only came into the picture in the 80's), and aerospace entrepreneur/love interest Carol Ferris. Other characters were brought in as Green Lantern during this time. Lovable jerk Guy Gardner first appeared, was Put on a Bus, then came back full time during the Crisis. Stoic architect and former U.S. Marine John Stewart became a backup Green Lantern during the well-known "relevant" Green Lantern/Green Arrow issues, and then the main Green Lantern in the 1980s when Hal Jordan gave up the title. Alan Scott would also return, first as an Earth-2 counterpart to Hal, then after continuities got merged in the Crisis on Infinite Earths as a respected elder hero with only the loosest connection to the Corps.

Over the years, the Green Lantern title would gain infamy for being taken in a few controversial directions:

The Green Lanterns are also frequent members of versions of the Justice League of America, with Hal, John, Kyle and Jade part of different incarnations of the main team, Guy in the Justice League International, and Simon in a secondary JLA team. Alan Scott is also a founding member of the Justice Society of America, which is either the League's predecessor or its Earth-2 counterpart depending on the era, as well his daughter Jade, who was part of the Earth-2 counterpart of Teen Titans, Infinity, Inc., and one the formations of the Outsiders. Also see The New Guardians (not related to the current title), which was tangentially related to the Lantern franchise (founded by the Guardians and including Hal's friend Tom as a member).

With a Corps of over 7,000 alien enforcers, you better believe there's a Character Sheet. And if you're still confused about why there's so many Lanterns or how willpower tastes like green, feel free to read the Synopsis.

No tropes shall escape my sight: