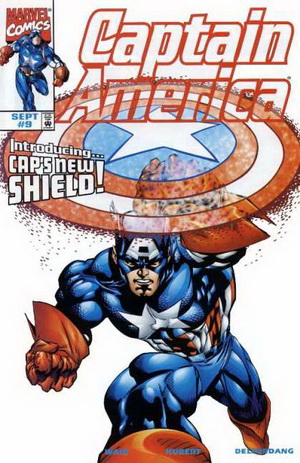 Because throwing his shield worked too well for him.
"Imitations, faker, huh? Yeah, that doesn't sound too bad. I certainly am a faker ... I had the wrong idea. My magic isn't creating swords. First of all, I can't do such a skillful thing. That's right. There's only one thing I can do, and that is to put shape to my mind...
...That's right. I don't create swords. I create a world that contains infinite swords ... There's no need to be surprised. These are all imitations."
— Shirou, Fate/stay night
Advertisement:

A specific Weapon of Choice — whatever it is — that is not original.

This doesn't refer to said weapon being a Shoddy Knockoff Product, but rather, the weapon is a copy made from Applied Phlebotinum, like Hard Light, Elemental Powers, Life Energy or what have you.

Sometimes it is possible for the user to create multiple copies at once, and make a literal Storm of Blades or Flechette Storm with it.

Often overlaps with Spontaneous Weapon Creation. Sometimes a subtrope of Shaping Your Attacks.

Compare Self-Duplication when the thing being copied is yourself. As well as Laser Blade, Flaming Sword and Energy Weapon for other weapons that are noncoporeal.