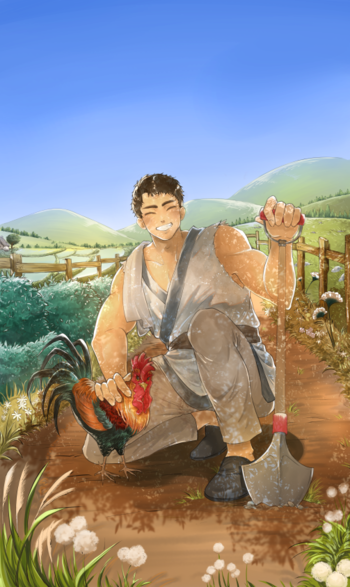 Jin Rou and Big D/Bi De
His body soared through the air. His legs lashed out with strength unknown to his lesser kin. He danced as the Great Master danced. He did breath, as the Great Master drew breath.
Something swirled around him.
Within him.
——
I smiled at Big D as he hopped and kicked along my fence.
Cute little guy.
Advertisement:

is an English language Web Serial Novel written in the style of Xianxia novels. However, the protagonist Jin Rou, or rather the person that transmigrated into his body, has no interest in ascending to the heavens, becoming the most powerful cultivator known to mankind, or even defeating the hordes of demons ravaging the land.

He just wants to make his own little slice of heaven in the peaceful, backwater regions of the Azure Hills with his rooster Big D, and maybe that cute sassy girl from the village. Well, that is, until the chicken starts learning martial arts. Or the pigs keep an army of mutant rats from harvesting the farm. Or the sentient fish shows up and starts being a living dishwasher. Turns out that just because he turned his back on cultivation, doesn't mean that the Cultivator Life is going to leave him behind so easily.

This story is also available on Royal Road

. The first book has been published on Amazon

as an ebook and audiobook.

open/close all folders
#-B
C-E
F-G
Advertisement:
H-K
L-M
N-R
S
T-Z
We give to the wiki, and the wiki gives back.