Literature / The Deer and the Cauldron 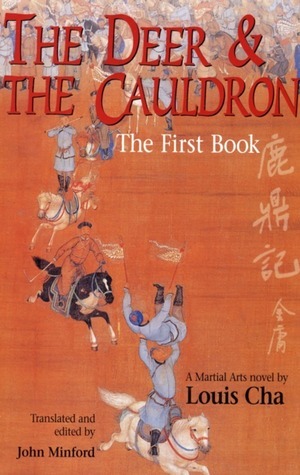 Wei Xiaobao is the lazy, uncouth, trouble-making ne'er-do-well son of a prostitute who does nothing but hang around all day, whether it be the halls of the Lichun Court brothel or the streets of Yangzhou, making questionable friends. This has only bitten him in the ass on two major occasions. One day, he chances upon some educated-looking men in dire danger and offers to shield them from the bloodthirsty authorities - after which he learns that they're all with La Résistance, and ends up entangled in their plot to dismantle the monarchy. His new (unwanted) mission - find a mysterious document somewhere in the Forbidden City known only as the 42 Scriptures, by applying to be the pageboy of a high-ranking eunuch, which proves to be a little less cushy than expected. Knowing he can still survive on favors, Wei Xiaobao smooth talks his way into the good graces of everyone from the chambermaids to the captain of the guard, and befriends a young boy named Xuan Luo... then, to Xiaobao's surprise, he discovers that Xuan Luo is the current Emperor.

So begin Wei Xiaobao's life as a reluctant pawn of both the revolutionaries and the Emperor, trying to stay alive as he constantly finds himself the target of innumerable attempts to kill him. Meanwhile, he travels around China in search of great treasure and adds more and more women to his growing harem.

The Deer and the Cauldron (also known as The Duke of Mount Deer) is the second to last work of Jin Yong that plays with, if not outright breaks, quite a bit of the author's previous Wuxia conventions.

The novel has been adapted to a two part film starring Stephen Chow in 1992 and a 50 episode TV series in 2008, as well as many other adaptations.

This book shows examples of:

As I was walking to St Ives, I met a man with seven wives...