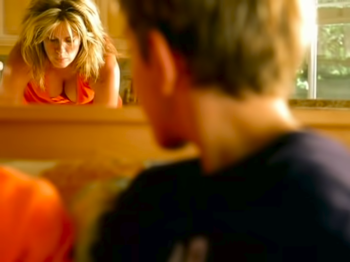 She's got it goin' on.
"Stacy's mom has got it goin' on
She's all I want and I've waited for so long
Stacy, can't you see you're just not the girl for me?
I know it might be wrong, but I'm in love with Stacy's mom"
—"Stacy's Mom,"

In media where the protagonists are somewhere between pre-teens and twenty-somethings, there's usually at least one character older than the other protagonists. This character is often the Team Mom, The Mentor, etc. Sometimes, in addition to just being attractive and wise in general, an older character attracts the romantic attention of one or even most of the younger characters. Even the ones who don't have a crush will admit the character in question is one of the most attractive people that age they've seen.

In general, Stacy's Mom will not return the boy's affections and may not even notice them. However, upgrades occur occasionally.

This is a character who meets the following requirements:

Note that it does not count if the person with the crush is:

May overlap with Even the Girls Want Her/Even the Guys Want Him and Hollywood Homely.

Compare Teacher/Student Romance and Mrs. Robinson, in which the attraction is mutual. Compare Likes Older Women, where a character deliberately pursues an older Love Interest. Also compare Silver Fox. May result in a May–December Romance. If the interest is mutual, it may result in I Banged Your Mom.

Contrast Christmas Cake, a Japanese trope where an older character struggles with relationships.