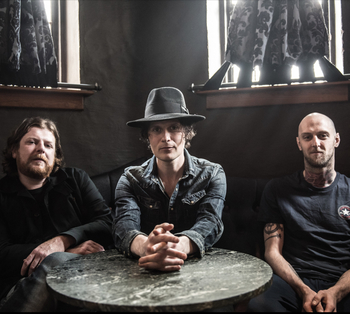 From left to right: Barry, Jon, and Mince.
Advertisement:

A Scottish alternative rock band formed in 2005. Composed of Jon Fratelli, Barry Fratelli, and Mince Fratelli, the band members took their assumed names from the villains of the 80s movie The Goonies. They've released five albums: the best-known is their first, 2006's Costello Music, which they followed up with 2008's Here We Stand and, following a hiatus, 2013's We Need Medicine and 2015's Eyes Wide, Tongue Tied. Their fifth album, In Your Own Sweet Time, released on March 16, 2018.

Notably, almost all of the band's songs are about girls.