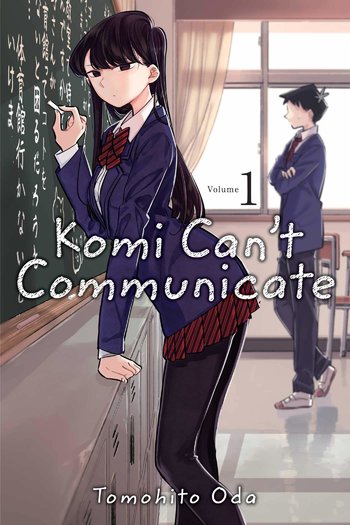 I'm glad I spoke.note Front: Komi Shouko; Back: Tadano Hitohito
I know. Komi is beautiful. She's the most beautiful person I've ever seen. Her skin is porcelain. Her hair is silk. Her large eyes are almond shaped. And she smells good. Basically, she glows. However... I know. I know Komi can't communicate. I also know how much she truly wants to talk to people. And now I'm her friend.
— Tadano's inner monologue, Ch. 7
Advertisement:

Tadano Hitohito is just your Ordinary High-School Student starting his first year of high school. Planning to have a peaceful and normal high school life, his plans came to an end before they even began. The reason? He has been seated right next to the overwhelmingly beautiful School Idol, Komi Shouko, and thus has become the target of the entire class' jealousy. Soon, however, he figures out Komi's secret: underneath her beautiful appearance, Komi suffers from a communication disorder which prevents her from making friends or even speaking normally to other people.

Empathizing with her plight, Tadano resolves to spend his high school life helping Komi make one hundred friends. Yet, things may not be as easy as they sound, as the school is filled with students with strong personalities, and making friends with these weirdos might bring troubles of their own.

Compare to Hitoribocchi no OO Seikatsu and Kimi ni Todoke, two manga works with girls with similar anxiety/isolation problems, and Senryu Girl, a manga with a high school girl who communicates exclusively through poetry.