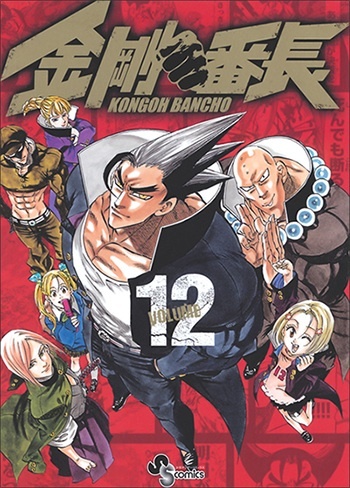 Kongoh Bancho ("Gang Leader Kongoh") is a shonen manga by Nakaba Suzuki that was serialized in Weekly Shonen Sunday magazine from 2007 to 2010 and compiled into 12 volumes. It stars high school student Akira Kongoh, a ten-to-twelve-foot-tall mountain of muscle with incredibly spiky Anime Hair, mile-wide shoulders, and a stare that could cut bread.

After a series of misadventures involving a young girl named Hinako Sakura, who has a compulsion to take pictures of things that are "sooooo unusual" with her cell phone's camera, and her younger sister Tsukimi, in which he demonstrates his incredible strength and resilience (as well as his capacity for kindness and understanding), Kongoh reveals his reasons for his sudden appearance: He has come to stop something called "The 23 District Project". This involves people called "Bancho", people who have exceptional fighting skills as well as great amounts of charisma (and who can be identified by the dark red phoenix tattoo on the back of their neck), fighting for control of the 23 districts of Japan. (The word "bancho" itself is usually used to refer to the leader of a delinquent gang, and all Bancho wear Japanese school uniform jackets, in one form or another.) Whosoever conquers them all will be given control of Japan and will be able to mold its future to their liking.

He later ends up defeating one of the Bancho - Iai Bancho, a master of iaijutsu. He is then told that defeating a bancho means you gain their territory and are now part of the 23 District Project, whether you want to be or not, and is given his new title by his defeated opponent: Kongoh Bancho.

From there, it leads to awesome fights with The Power of Friendship causing Defeat Means Friendship to those who are defeated, while trying to stop the Big Bad and his Absurdly Powerful Student Council from destroying Japan's population.