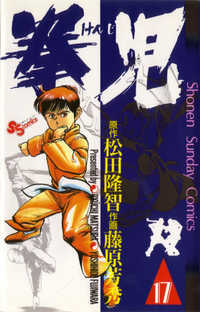 Kenji Gou is an average kid in the neighborhood, healthy and sometimes fights bullies on the behalf of his oft-bullied friend Taichi Ichimura. His mother worries about him constantly, but his grandfather Kyotaro Gou taught him martial arts anyway. He grew up into a peaceable, overall Nice Guy who loves kung-fu. However, one day his grandfather went to China and have yet to return. Fearing for the old man's life, the young lad embarked in a journey to find him.

Kenji (拳児) is a manga series written by Ryuchi Matsuda and illustrated by Yoshihide Fujiwara. It was serialized in Shogakukan's Shōnen Sunday from 1988 to 1992, totaling 21 volumes.