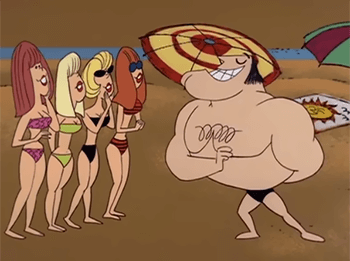 "Jim and I were friends than mates
We'd go to Muscle Beach in Santa Monica
and watch the bodybuilders flexing and flipping"
— Carole Boston Weatherford, Beauty Mark: A Verse Novel of Marilyn Monroe
Advertisement:

It's a lovely day at the beach. Sun, surf and good times. You're probably out with your friends or your girl catching some rays, playing some volleyball, frisbee or suikawari, and/or simply enjoying the beach scenery.

Then he shows up. He's big. He's strong. He's wearing only a speedo. He impresses the ladies by flexing and demonstrating his strength. He may belittle, bully or make jealous any non-muscly guy in his presence. He just might ruin your day. You have just met the Muscle Beach Bum.

The Muscle Beach Bum is essentially a cross between a Hunk and a Jerk Jock found primarily in beach settings. On one hand, he can be as dumb as a bag of hammers, an antagonist who flaunts his muscles around, or both. On the other, he's just not antagonistic but is a major annoyance to those around him. If he has a job, he's most likely to be a lifeguard (whether or not he's actually competent or just to impress ladies is to be seen).

The Trope Name comes from Muscle Beach, a location in Santa Monica (a Los Angeles suburb) known as the birthplace of the modern bodybuilding and fitness boom in the mid-1930s. In a Beach Episode, it's highly likely you'll find him and his type. May be related to/can also be a Surfer Dude.