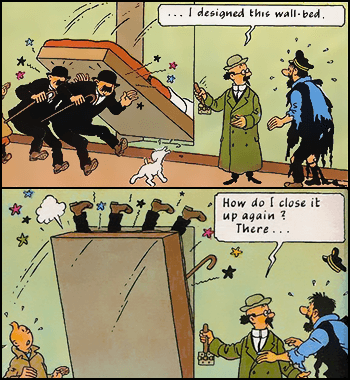 Who maimed the detectives? Why, it's an open-and-shut case.
"Featuring Murphy beds: Charming to the unsophisticated."
— Silent Movie
Advertisement:

Whether a simple hammock, couch, futon, or lawnchair, or a king-size bed or Cool Chair in a Big Fancy House, for most of us, where we fall asleep is the one place in the world we feel most secure. For the boot camp valedictorian, it's a source of pride along with his flawless uniform and clean rifle.

But woe to the Chew Toy, the Cosmic Plaything, The Woobie, the well-deserving villain, or the victim of a particularly cruel fate or Kick the Dog moment. For them, no place in the universe is safe, especially where they least expect it. At the worst possible moment, snap! Covers go flying at unlikely velocities, mattresses fold like origami, and furniture morphs like a Transformer as it consumes its victims.

If it's a Comedy, Hilarity Ensues, and the lasting consequences will likely be limited to minor humiliation, a day spent peeling potatoes in Boot Camp, or a day shopping for a new bed. In a setting on the more realistic or dramatic side, serious injury may be the best that the poor victim can hope for.

Not to be confused with a Murphy bed

(no possessive), a type of bed designed to fold into a wall when not in use, although they provide a popular version of this trope (slapstick routines involving Murphy Beds started appearing in silent movies less than a year after they came out on the market), slamming the victim into the wall to be discovered later on (quite possibly Squashed Flat).

This often happens in cartoony hospitals, where someone in a full body cast will have the misfortune of having a bed that will painfully sandwich them.

For furnishings that are deliberately designed to entrap their occupants, see Shackle Seat Trap. For waterbeds specifically, see Wacky Waterbed.

Kermit, Fozzie and Gonzo's bed is a Murphy Bed. Which is known to collapse only when it's funny.

Kermit, Fozzie and Gonzo's bed is a Murphy Bed. Which is known to collapse only when it's funny.