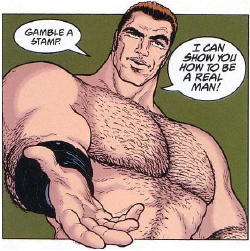 ...Well, we can try but you won't believe it. Flex Mentallo, Man of Muscle Mystery, is supposed to be a Silver Age super-hero with a Charles Atlas Superpower that allows him to do, well, anything by flexing his muscles while simultaneously being a parody of a Charles Atlas advertisement ... the strange thing is that he's a fictional comic book character created by a young psychic named Wally Sage. Flex is then brought to life through Wally's abilities and fights crime. He meets up with the Doom Patrol, saves everyone from a telephone monster from underneath the Pentagon, and then helps, uh, destroy the Dark Age.

Anyway, Mentallo was created by Grant Morrison, which explains a lot. He first appeared in "Doom Patrol" vol. 2 #35 (August, 1990). He was regularly featured in the series to 1991, before getting his own 4-issue mini-series in 1996 which deconstructed and reconstructed comic books in their entirety and was about growing up, holding onto your imagination, love, hope, responsibility and realizing that, yeah, there will always be heroes... and you might just be one of them.

Go ahead, gamble that stamp.

Flex Mentallo made his live action debut in the Doom Patrol series on DC Universe, portrayed there by Devan Chandler Long.