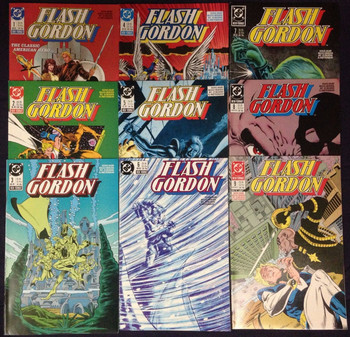 Flash Gordon was a 1988 comic book maxi-series adaptation of the famous comic strip hero Flash Gordon, written by Dan Jurgens and produced by DC Comics. The series compressed the basic story into 9 issues and still found time for plenty of action, worldbuilding, and character development.

In this series Flash is a washed-up basketball star looking for his purpose in life, which he finds in defending the planet Mongo from their tyrannical overlord, Ming the Merciless. Accompanying him are the feisty reporter Dale Arden, and the scientist Dr. Hans Zarkov, while Ming's daughter Aura may be a friend or a foe.

The series ran for the planned 9 issues, and while it ended with a hook for a continued series, it was never picked up.