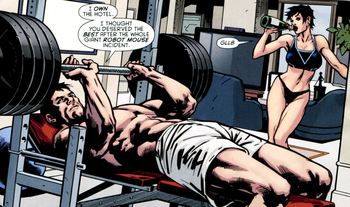 An athletic character working out or practicing a sport is an excellent opportunity for Fanservice. It gives ample opportunity to watch sweaty bodies in constant motion, labored breathing, muscle flexing...

This is a very common way to introduce stealth fanservice in works where it would otherwise be jarring to the audience, and it is especially popular in action movies or Shōnen anime, where it makes it easier for the guy to persuade his girlfriend to join him. They don't have to be muscular, either (though they often are)—they just have to be working out. Often they're shirtless, or if the character is female, she's only wearing a sports bra. Even if they aren't shirtless, they're usually wearing very minimal or form-fitting clothing.

Female characters aren't excluded from this either, but it's slightly more common for the character in question to be male. When this trope is used for female characters, expect the women in the gym to be lean, toned, and fairly buffed and muscular, but not overly bulky, and doing exercises such as flexibility training (i.e., Yoga and Pilates), cardio training (i.e., treadmills), and calisthenics (i.e., sit-ups, push-ups, squats, and jumping jacks), in addition to strength training with weights. In addition, when the characters are female, expect their grunts to sound less like they're working out and more like they're having orgasms.

When they decide to work out, it can easily be justified as their way of training for a fight. They'll need to get their bodies into shape so they get a better handle on the physicality of a fight. It also allows them to wield melee weapons more easily, or it can be his way of honing his superhuman abilities or dealing with stress... but let's face it, we're only really interested in the idea of a bare chested, hot, sweaty, muscly guy or strong, toned, curvy girl sculpting their abs, arms, or legs, or improving his or her game in front of us.

Hibiki lampshades the nature of the anime.

Day At The Gym

Hibiki lampshades the nature of the anime.

Day At The Gym