Anime / Ponyo on the Cliff by the Sea 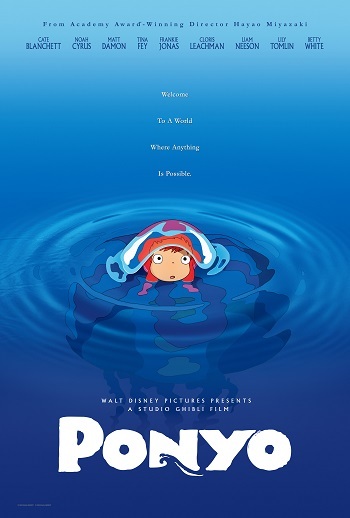 Ponyo on the Cliff by the Sea (Gake no Ue no Ponyo) is a 2008 film by anime master Hayao Miyazaki and Studio Ghibli. Very, very loosely based on the Hans Christian Andersen story The Little Mermaid, the movie follows the adventures of Ponyo, a sort of...goldfishy thing, and her quest to become human and be with the boy she loves.

In comparison with Miyazaki's other works, this is a return to his more whimsical, Slice of Life movies such as My Neighbor Totoro and Kiki's Delivery Service. Another useful note is that also like Totoro, it is more influenced by American animated films unlike most Miyazaki movies, which are more influenced by French animated films. It is also the studio's first film in years not to feature any CGI, being completely hand-drawn.

The Disney dub of Ponyo on the Cliff by the Sea received a U.S. theatrical release in August 2009 under the abbreviated title Ponyo (after being initially marketed as Ponyo on the Cliff by the Sea). It is the highest-grossing Miyazaki movie in North America, and the sixth highest-grossing anime film of all time. On March 2, 2010, Disney released it on DVD and Blu-ray. GKIDS re-released it, along with five other Ghibli titles on October 17, 2017.

Ponyo on the Cliff by the Sea contains examples of:

Alternative Title(s): Ponyo, Ponyo On A Cliff By The Sea