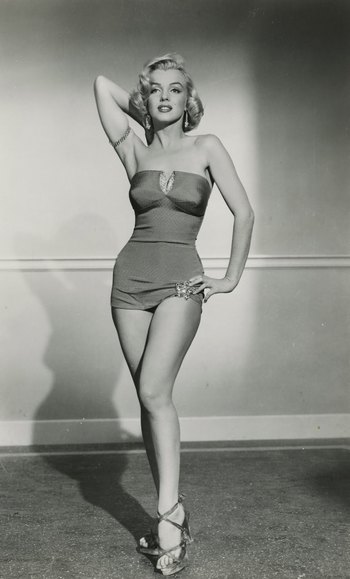 One of the standard "sexy" poses.

A common Modeling Pose where the person places one hand on the side or back of her head and the other on her hip/buttock. This pose is generally associated with modeling since it tends to draw more attention to a woman's curves. It also has a certain versatility in that it can be both a Fanservice-y pose and simultaneously elegant depending on how it is utilized or framed. It is also often associated with pin-up models. This pose is used for a few reasons:

1. The largely forward-facing nature of the pose, combined with making the poser take up slightly more space, make her appear more confident, in a way making it the inverse of the Coy, Girlish Flirt Pose.

2. By having one hand on the head, it draws attention to the woman's face, along with her hair.

3. Meanwhile the hand on her hip/buttock draws attention there, to show off that she has nice hips or a shapely posterior (if placed further back rather than forward). This can be further emphasized by pivoting her stance so that the hip is more prominent, or by shaking her hips.

4. The placements together guide the viewer's eyes in such a way that that they notice the woman's curves.

5. When being used to show off an outfit like a dress, it keeps the overall image dynamic and interesting while not blocking the clothing they're trying to display.

In addition to the basic pose, extra touches can be added such as Foot Popping or twisting or pivoting to the side. It also can be tweaked by being done while lying down, often invoking Reclining Reigner or Ready for Lovemaking.

A character who strikes this pose is likely Ms Fan Service or The Fashionista, at least in more straight examples. If done playfully it is often meant to imitate or invoke such characters. They may also be a Fashion Model.

Can be combined with a Contrapposto Pose, though a full-on combination of the two may be a little over the top. Compare Ready for Lovemaking, a similar pose performed on a bed that's more explicitly sexual, and Boobs-and-Butt Pose.