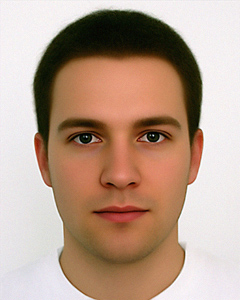 Who?
Robot Worker: President Business! We're trying to locate the fugitive, but his face is so generic it matches every other face in our database!
President Business: Diabolical...
— The LEGO Movie
Advertisement:

The Ridiculously Average Guy is pretty much middle-of-the-road in all things. He's not ugly, but he's not particularly handsome (or pretty or cute) either. He's not a moron, but he's not one of the best in his class either. (He will probably tend towards the low end or in the middle on grades, possibly even failing his entrance exams, but he's not portrayed as aggressively or particularly stupid, either.) He has no special powers, even if the rest of the cast does pretty much as a rule.note Or even if he has a power, it will be one that's mundane in comparison to others. He's not a complete weakling, but neither does he excel at any physical activities. He most likely has a ridiculously common hair color, like brown, dark brown, or black. It's virtually always a "he" because in fiction, being female is a special characteristic in and of itself.

So why the hell is he the main character?

Well, obviously, it's because the writers intend the audience to find him easy to relate to. Of course, considering that he winds up completely and totally overshadowed in almost all things by everyone around him, this fairly easily winds up turning into This Loser Is You. Pretty much everyone around him will constantly be telling him just what a loser he is, and the Ridiculously Average Guy usually has very little, if anything, to say in his defense.

To offset these obvious drawbacks and make his inclusion into The Team look less ridiculous, he may be The Heart or the Only Sane Man of the group to bring something on the table that doesn't require superhuman powers. If the story features supernatural powers, especially those that reduce regular Muggles to mere pawns, a popular choice is to give him a nullification power: either he can temporarily cancel the powers of others, or those powers don't work on him. Not only does this underline his aggressive and all-consuming mundanity, effectively forcing it onto others, but makes it a Disability Superpower that brings opponents down to his level, allowing him to more-or-less-believably overcome them with primitive means and "simple life wisdom", implying they are so used to their powers they become Fish out of Water when they don't work or at least don't work as expected.

Of course, he will also inevitably be central to some world-saving plot, come out on top at the end of every chapter, and have exceptionally beautiful and sexy, cute and fun, or just plain goofy girls hanging all over him and begging to be allowed to fulfill his every fantasy, usually along with one who acts like she hates him but will probably wind up with him in the end anyway.

This trope is most noticeable (and confusing) for how he winds up with these girls, this fate, or those victories. The girls especially... sure, he's a decent guy and all, but often the only explanation seems to be that girls, when offered chances to be with the most handsome, richest, most famous, and in all other ways exceptional guys, actually prefer the dude who's going to give them a life with the absolute fewest surprises and least excitement possible. Can be (and probably has been) an example of Wish-Fulfillment on the part of the writer. Or alternatively done so for the male audience.

Sometimes, the guy isn't a main character... he's just some plain, normal guy that nevertheless tempts a strong female character with her own life of excitement and adventure with the prospect of settling down to a nine-to-five in a city apartment to possibly have 2.5 children. He's also the surprise a lot of writers have waiting in the wings to make sure that the Pseudo-Romantic Friendship actually turns into Bait-and-Switch Lesbians.

Of course, to a degree, this is Truth in Television, since some women do want stable guys they always know what to expect from but, just like the idea that All Girls Want Bad Boys, it's a generalization.

Most of the time he's the hero of the story. Conversely, this can serve as an extremely good Secret Identity.

Aside from being extraordinarily handsome, Wade is extra ordinary.

Aside from being extraordinarily handsome, Wade is extra ordinary.