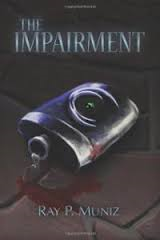 A 2013 Sci-Fi novel by Ray P. Muniz and the first in a planned series called “Witness to Unsightly Truths”

Kyle Griffin was just another ordinary freshman college student with an ordinary life and problems. One night however, after a night of heavy drinking, he finds himself immersed in a world he never believed existed when he finds his roommate murdered by an extra-terrestrial. Now Kyle becomes a scapegoat in a string of similar murders occurring on campus for the past two years. Framed for the murder and with the entire school down his throat, save for a few believers in his innocence, Kyle must find a way to clear his name and discover the truth of the dire situation he’s found himself in.

A sequel, titled The Enlightenment, is in the works.