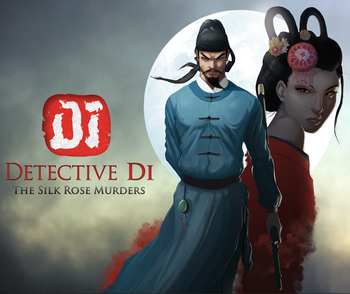 Detective Di: The Silk Rose Murders is a mystery Adventure Game made by Nupixo Games. It was funded Kickstarter on March 27th, 2015, and released on PC through Steam on May 1st, 2019.
Advertisement:

Taking place in Medieval Imperial China, during the reign of the Tang dynasty

, the player is placed in shoes of the historical Chinese folk hero Di Renjie

, a magistrate tasked with uncovering the truth behind a recent string of murders in the capital. As politics surrounding the Empress Wu's recent coronation come to a boil, Di realizes it's not only his reputation at stake...

It includes the following tropes: