Video Game / Deliver Us the Moon 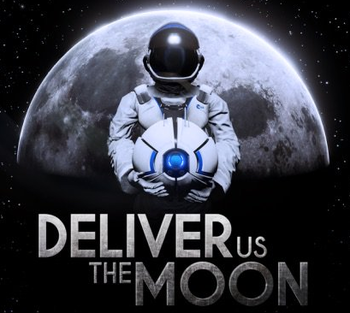 Deliver Us the Moon is an episodic Environmental Narrative Game, developed by a Dutch team KeoKen Interactive. It was funded

on Kickstarter in March 2016. The development took longer than anticipated, so the first episode, Fortuna, was ultimately released on September 28th, 2018 on PC through Steam.

It is set in the near future, when nearly all of the Earth's resources have run out after the Great Energy Crisis of the 2030, and thus a World Space Agency had been formed in order to extract Helium-3 from the moon, process it on the lunar colonies, and then send it back to Earth through the Microwave Power Transmission system. The work on the colonies began in 2032 and the system was finished in 2041, and it worked...until it went offline in 2054, and all connection with the lunar colonists was lost. Moreover, the Earth no longer had the resources to maintain WSA by that point, and it was shut down a year later. Thus, only a small group of former colonists was able to secretly train and launch the protagonist by 2059, who goes to the moon in what is called "a final do-or-die mission to save mankind from extinction".