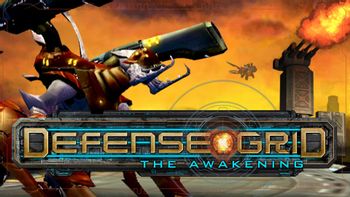 "The invasion began without warning. After a thousand of years of peace, the aliens have returned. The planet's survival depends on activating the ancient Defense Grid... If it still functions at all."
—Story of Defense Grid
Advertisement:

Defense Grid: The Awakening is a Tower Defense game developed and published by Hidden Path Entertainment. It was released for the PC in December 2008 and Xbox Live Arcade in September 2009.

Over a thousand years ago, an Alien Invasion on your planet was beaten back. Now, the aliens are invading again, and your world is in peril. They've besieged your city, cutting you off from your home. In the nearby ruins of an old military base, you find a dusty terminal and reawaken an ancient Artificial Intelligence—who, in reality, is the very general of the previous war! After the war his brain was uploaded into the planetary defense grid, in case the aliens ever returned.

With the help of General Fletcher, you've jumped into the command chair to re-awaken the grid and Save the World.

. Though they didn't get enough money to fund it, the project was funded

by Ascended Fanboy Steven Dengler, who also helped co-produce various Double Fine projects. It was finally released on September 2014, with 505 Games as the publisher.