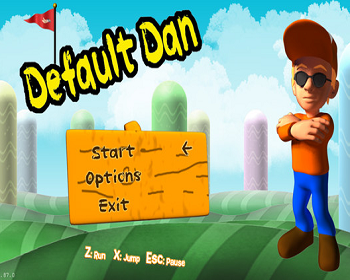 Stop us if you've heard this one before. The Princess- Record Scratch!!

Wow, that was quick. Okay, how about this?

The princess kidnaps The Hero's turtle monster friend, and now he has to traverse a series of 2D Platformer worlds avoiding power-ups and coins and getting help from enemies, spike traps, and bottomless pits.

That is Default Dan.

Default Dan is a Platform Game by Kikiwik Games that takes the basic plot and mechanics of your average Super Mario Bros. game, and flips it all on its head. Here, coins make you explode, enemies are your allies, and what were traps are now helpful to you.

The game was funded on Kickstarter, and released for PC on Steam on January 15th, 2015. It was ported to iOS and Android soon after.