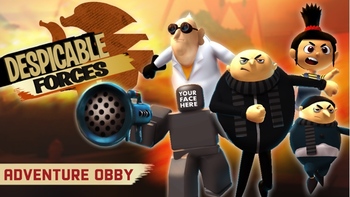 Despicable Forces is a game created in the Roblox Engine by Shovelware Studios. The game frames itself as an adventure obby and is, of all things, a parody of Sonic Forces using characters from the Illumination Movie Despicable Me. Perhaps more bizarre than this odd choice of a crossover is the unusual amount of quality put into the game, which isn't something you'd typically get out of a Roblox Obby.