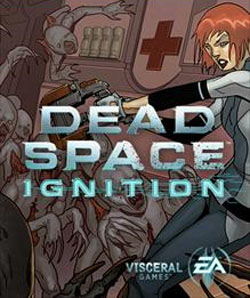 Dead Space Ignition is a DLC game for Xbox Live Arcade and PlayStation Network set in the Dead Space universe. It leads directly into the events of Dead Space 2.

An engineer named Franco is ordered to repair a computer mainframe deep in the Sprawl, and his girlfriend, an officer named Sarah, goes along with him to protect him. Once the mainframe is repaired the Necromorphs attack, and Franco and Sarah try to escape. The game gives the player options on what path to take.

Levels are made up of three Hacking Minigames; the player has to complete one, two, or three of them to proceed. One minigame is a race to get your computer program to the end before the other programs while avoiding walls that slow you down. The second is a reverse Tower Defense game; you send out unlimited computer bugs to destroy the computer defenses to reach the program before time runs out. The third is a Light and Mirrors Puzzle where you put down mirrors to bounce color-coded lasers so they hit their corresponding computer program thing.