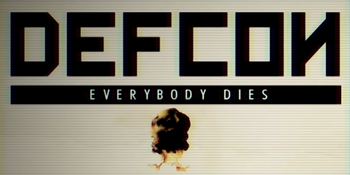 How about a nice game of chess?
This page is about a work. If you're looking for the trope, that's Defcon Five.
Advertisement:

"It's Global Thermonuclear War, and nobody wins. But maybe - just maybe - you can lose the least."

A unique 2006 Real-Time Strategy from Introversion Software. You play a general in control of your chosen side's nuclear arsenal, and your goal is to exterminate the enemy's civilian populace while preserving your own. In order to win, you must strike against your enemy's population centers while at the same time crippling their ability to retaliate. Easier said than done since launching a strike reveals the locations of that strategic asset to everyone in the game. The game is inspired by the 1983 cult classic WarGames and designed to simulate the paranoia and anxiety of the Cold War.

There are 3 scoring modes in DEFCON:

There are also multiple game modes:

When playing the game, the DEFCON level increases as the game progresses. The level determines what actions can be taken in the game.