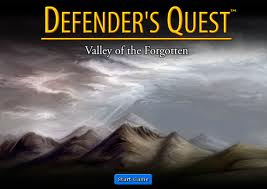 Are you a fan of Puzzle Quest? Are you thinking "Man, I just have to play another game that's an RPG mashed up with some other genre!"? Then boy, do we have the game for you.

Defender's Quest is an indie game created by Level Up Labs that blends the addicting gameplay of a Tower Defense game with the story and tactical depth of an RPG. The game begins when Azra, the royal librarian of the Ash Kingdom, contracts a plague that turns those infected into horrifying monstrosities known as Revenants, and is thrown into a plague colony known as the Pit as a result. Fortunately, she quickly discovers that, not only is she immune to the malady, but the infection has gifted her with strange powers that allow her to fight against the Revenants.

A very extensive demo of the game, consisting of the entire first two (of seven) acts, can be played for free here

. Once you've beaten that, you can purchase the full version (and very handily transfer your save game from the demo to it) here!

. You can also find it on Steam

On June 14th, 2016, an HD update was released enhancing existing textures and giving new features such as Azra's journal from the get go.