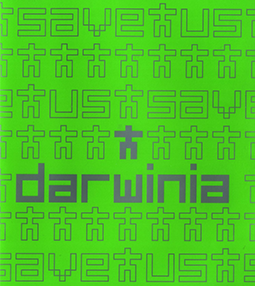 Darwinia is an award-winning Action-Adventure / Real-Time Strategy game developed by Introversion Software. The game centers ont a Magical Computer that runs a simulated world, the titular Darwinia. The inhabitants of the world, called Darwinians, are docile green stick figures that each have their own unique digital soul. This is all part of a research project on artificial intelligence.
Advertisement:

When the player connects to the Darwinia server, the world has been hit by an infection of a very nasty computer virus and Dr Sepulveda, the scientist responsible for creating Darwinia, is at his wit's end and starting to seriously consider wiping out the whole project, and two decades of research just to stop the virus. The player showing up gives him hope that his digital world can be saved.

Over the course of the game, the player visits a number of unique locations, with Dr Sepulveda giving pieces of history for Darwinia in most of them. Towards the end of the game, some very nasty forms of the virus are encountered, one of which can actually destroy the souls of Darwinians.

Introversion Software has since made a multi-player sequel called Multiwinia. It has also been released on Xbox Live Arcade as Darwinia+, combining the basic game, the rocket level that served as the second game demo (now considered an epilogue), and Multiwinia. In April 2022, Introversion released Darwinia 10,000th Anniversary Edition, a remastering update for PC that improves compatibility on modern systems with support for newer graphics and audio API's, improved UI scaling, support for graphical features such as anti-aliasing and resolution scaling, and more.