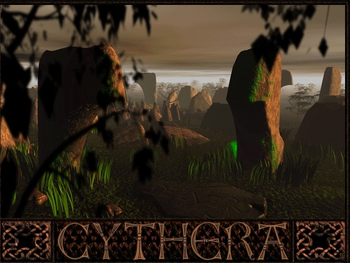 Cythera is a Role-Playing Game, released by Ambrosia Software in 1999.
Advertisement:

One sleepless night, the player is transported to the land of Cythera from their home by Alaric the LandKing. Alaric is bonded the land and has used his power to keep the land prosperous, but lately the bond is weakening, causing chaos across land. Plauge, violence, and treachery now threaten the land, and in desperate attempt to save Cythera and himself, he has used most of his remaining power to summon a hero from Earth to save the land.

To complicate things further, the hero is warned through a mysterious entity called Omen that Alaric may not be all that he seems and must be destroyed to return balance to the land.

And so with only a few leads, the hero sets off to discover the truth behind, well, basically everything. While Cythera is an RPG, the focus is less about the combat and more about figuring things out. The dialogue system allows the player to type in keywords that the NPCs react to, so it's important to figure out who to talk to and what about.

Has a wiki with more than 200 pages here