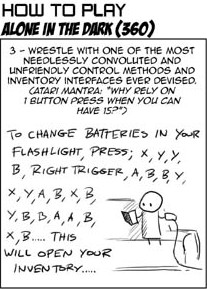 ◊
Jason: To throw a basic punch, hold down the B, C, and X buttons, tap the Start button, use the arrow pad to indicate direction and release the C button when the force bar tops 80 percent.
Peter: That's a basic punch?!
Jason: Whoops. That was an uppercut. The basic punch doesn't use the X button.
—FoxTrot
Advertisement:

The control system is critical to any video game. No one is going to put up with a game where a bizarre magical rite is required on the player's part just to get the hero to attack.

Sometimes though, the control system takes a while to get the hang of. While some games like to keep things simple—"hit B to attack, hit A to jump" for example—others will have a more complex method for combination attacks, high powered attacks and short cuts that bypass the Menu screen. Usually this involves hitting a combination of buttons in sequence or at the same time, which takes a while to master. On the odd occasion, the game appears to be asking you to perform a feat of dexterity that might land you in the hospital. It's generally accepted that this system suits experienced gamers rather than casual gamers, although even experienced gamers can occasionally find themselves hurling the controller against the wall in frustration.

Other games may require a certain level of experience or skill because the input isn't as straightforward as hitting a button. Some systems may call for drawing shapes, shaking the controller at exactly the right time, or even yelling into a microphone, which can be a bit of a hit-and-miss affair. It might take a while to be able to draw exactly the right shape,

and meanwhile you find your character doing everything other than what you wanted them to do. Or you might find yourself adopting a number of silly accents in an attempt to get the microphone to register your voice. An unintended consequence is that sometimes clumsy players end up blaming the control scheme over their own coordination/stability problems.

Finally, there is a case where the controls are neither complex nor unergonomic, but they put more stress on timing. This is usually seen in the games aiming to portray action more realistically, taking into account such things as the time required to actually deliver an attack or proper synchronization of gears to avoid stalling.

Usually, all cases are only a pain in the neck while you're still getting used to the game. By the the time you're familiar with the system, the game misinterprets your instructions less frequently and the rage headaches you've been suffering ("I said jump you stupid hero, not walk off the cliff!") will subside.

Of course, if the controls are near nigh impossible, the game could simply be said to have a "bad" control system, but where the line is drawn is highly subjective.

Related to, and often crosses over with, Damn You, Muscle Memory!, where remembering how other games are played adds to the headache of trying to control the current one.

Can sometimes be an aspect of Waggle.

If there are rewards for picking a more complicated control option, then it's Difficult, but Awesome.

No, this is not about the "dexterity" stat in games with stat points.

The game does not remember slots, so if you use all of your health kits, then you have to go through the whole sequence all over again when you find some more. There is also no Menu Time Lockout, so good luck trying to do this in combat.