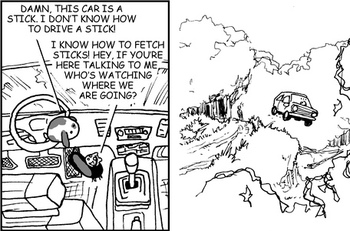 Ezekiel: Why didn't you tell me you can't drive?
Havana: I can drive! I just can't drive stick!
Ezekiel: Why is it so hard? It's simple!
Havana: If it was simple, I could do it!
— Holy Matrimony
Advertisement:

A non-videogame example of Some Dexterity Required, also known as driving a manual.

Perhaps the American tourist is picking up their European rental car at the airport, or perhaps the main character needs to park the old banger or the superpowered Cool Car. Either way, they'll take a look inside at the manual gearbox and then exclaim in horror "I can't drive stick!" - and then proceed to anyway. Usually used as an excuse to then laugh at some terrible driving (crunching gears and noisy, lurching stalls are a must) or as the setup for a "My Car Hates Me", although it can also be used to provide justification for allowing one character to drive over another, more sensible choice (e.g., if you need The Ditz to come along for the road trip).

For the most part this is a US-only trope, as automatic transmissions are very widespread in the US and Canada, but aren't as popular elsewhere. Manual transmissions tend to be more fuel-efficient, cars are generally smaller where a manual transmission is better suited to extract power from less powerful engines, and gasoline is way more expensive in other countries than in North America. note  Although this trend is being downplayed in recent years in Europe. This is partly due to improvements in automatic transmission, partly due to worsening congestions across urban areas and on major highways (which amplifies the inconvenience of operating stick), and partly due to declining availability of manual transmission cars provided by manufacturers - particularly American and Japanese cars. In the latter case, the increased platform-sharing between different car manufacturers do not help. Another reason for it being uncommon in European shows is that most countries require a different class of license to drive a manual - if you take your test on an automatic, that's all you'll be legally driving. This system is also used in Japan, even though automatics are even more dominant there than in North America. In many other countries around the globe, the law even states that driver's education must be given on a manual transmission car. note In Latin America in particular, even though automatic transmissions are more widespread than in the rest of the world, manual transmission is still considered the "good" transmission, and it is socially unacceptable to not be able to drive a manual transmission car. It should be also noted that people accustomed to a manual transmission can still have a hard time getting used to a car with a different gear layout, especially with the reverse that may or may not require pushing the lever down or rising a retainer ring up before shifting.

It should be noted that in real life, and in some fictional works by people who know cars, changing gears on a truly old vehicle is a challenge, even for people used to driving manuals. This is because of the now-ubiquitous mechanism called "synchromesh", which allows you to change directly from one gear to another, but didn't become common until after World War II. Before that, you had to play with the throttle to spin the engine into the right RPM for the next gear, otherwise you'd get grinding gears (not good for the transmission service life) and/or can easily stall the engine.

Also tends to show up in any situation involving commercial vehicles above 25 tons, as heavy trucks are typically running nine to eighteen gears, usually without synchromesh in the US even today (though not in Europe as synchromeshes are legally required over there).