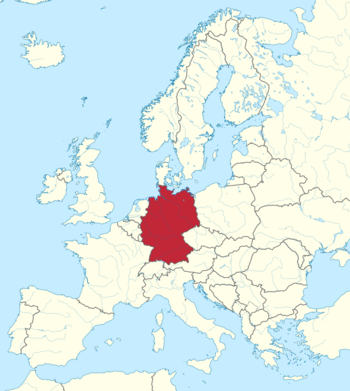 "We're twice as big and yet so small
Now we have to share so the Chancellor said."
"Life Isn't Easy in Germany" — And One
Advertisement:

Wir sind ein Volk!note We are one people!

On 3 October 1990, the two Germanies reunified. (They'd considered 9 November, it being the date of the Berlin Wall crumbling in 1989, also the date of the proclamation of the first German republic in 1918, but decided that firstly they didn't want another birthday for the GDR, and secondly, that day is kind of historically cursed

) Actually, East Germany joined West Germany in a manner that left many feeling it was an annexation. The enlarged state kept the constitutional structure of West Germany.

Under the Treaty on the Final Settlement with Respect to Germany (or the "Two-Plus-Four Agreement"), which came into force on 15 March 1991, Germany gained full sovereignty and the Soviets (soon thereafter most of it became Russia) left. The Americans and British stayed (due to the NATO) (and French forces are now stationed in Germany as well but as friends, not occupiers). The Oder-Neisse border with Poland became finalised in a separate treaty, the old East Germany became a zone free of nuclear weapons or foreign bases, and Germany renounced any claim to areas east of Oder-Neisse that had been part of Germany before 1945.

There was some opposition to the idea, based on the ultimately unfounded belief that Germany would again try to dominate Europe militarily. It just teamed up with old enemy France and did it via The European Union. There was, however, a notable spike of nationalist and racist hate crimes in the early 1990s - mostly in the former East Germany, but by 1995 it had mostly ebbed, and until the rise of the AfD Germany was among the only countries in Europe without a right wing populist party.

The new Germany now had to deal with the legacy of a part of it having been Commie Land for 40 years. East Germany had a massive pollution problem, the whole issue of Stasi informers (a lot of them, verging on a very unfunny Flock of Wolves) and a whole bunch of police officers who needed retraining — or sacking. The ex-"Vopos" still face social stigma.

Some rather poorly performed privatisation of state industry didn't help — most of it collapsing almost overnight the same as the rest of Eastern Europe — and the states of the former GDR have high unemployment as a result. Even 20 years later you can see the exact location of the old border when looking at random charts for unemployment, social services, and economic data.

Germany has the problem of die Mauer im Kopf, "the wall in people's heads" — people still thinking in terms of two Germanies. There are divisions between Ossis and Wessis, East and West Germans respectively. However this phenomenon is almost non-existent with young Germans who grew up after reunification (although obviously they can't avoid the economic issues, it's no more fundamental than the difference between young Americans from the East Coast and young Americans from the Rust Belt).

Germany became more actively militarily, being involved in Kosovo and Afghanistan, but opposing the invasion of Iraq.

In 2005, an early election resulted in a Grand Coalition, led by Angela Merkel, the first female Chancellor (and first one from former East Germany). In September 2009, the late economic unpleasantness led to Merkel's Christian Democrats and their pro-business Free Democratic (read: vaguely right-libertarian) allies winning a majority coalition together, ending the grand coalition. In 2012, the ceremonial President Christian Wulff resigned amidst a corruption scandal; he was replaced by Joachim Gauck, a pastor from Rostock and former head of the bureau for investigating the Stasi's crimes, meaning that Ossis held the two highest offices of state for the first time since unification. Gauck in turn decided not to run for a second term (which he would have easily won) and in 2017 was replaced by former foreign minister Frank Walter Steinmeier (SPD).

The Berlin Republic in fiction