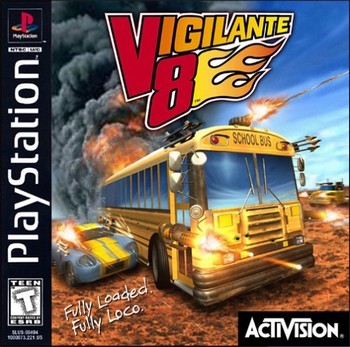 Set in The '70s during an oil crisis. A greedy conglomerate called OMAR (short for Oil Monopoly Alliance Regime) was buying up all the oil companies of the world and was on the way to being the only source for oil. However there was one country that was out of their grasp: The United States. To rectify this, OMAR hired a terrorist named Sid Burn to destroy any and all oil companies in the Southwest so that OMAR could swoop in and pick up the remains. Sid creates a gang known as the Coyotes, made up of crazy drivers bent on destruction, and terrorizes the Southwest with their armed vehicles. After one attack too many and no law enforcement to help them, a trucker named Convoy took matters into his own hands and organized a counter force known as the Vigilantes. After a raid on a military base, both sides wind up with weapons of mass destruction and the battle for the Southwest begins.

Created by Activision, Vigilante 8 was a Spiritual Successor to Interstate '76 and their answer to the Twisted Metal franchise, and it proved to be no slouch in vehicular combat. Destructible stages that also brought along their own hazards, special moves for the regular weapons, a nice story (albeit rather tongue-in-cheek), mind-blowing music, and some very tight gameplay made it a great alternative to TM.

Was later followed by a sequel, Vigilante 8: Second Offense. Slick Clyde, one of the original Vigilantes, has turned evil and gone to work for OMAR. Over the years, he rises through the ranks until he becomes CEO of the company, becoming known as Lord Clyde. However, the U.S is still out of OMAR's reach, which annoys Clyde to no end. So he steals an experimental time machine from Stanford and, along with two subordinates of his, travels back to the '70s to change history, starting with trying to off Convoy. The attack seemingly succeeds, and the Coyotes are re-created again. Convoy's niece Sheila and his widow Houston take up the mantle as the Vigilantes' new leaders to combat them. In the midst of this are the Drifters, who aren't affiliated with either side and just out for themselves.

Included more new areas (as well as the originals you can unlock), characters, cars and weapons, as well as modification pick ups which allow you fly, float on water or add skis for more traction.

The game also has a remake called Vigilante 8 Arcade for Xbox LIVE Arcade which improves the graphics and had a few of the sequel's elements.