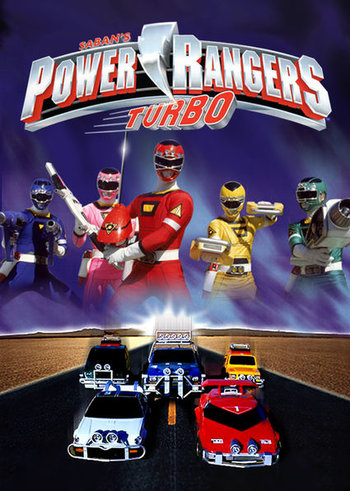 In the movie an alien wizard named Lerigot is being hunted by Space Pirates lead by Divatox because his magic holds the key to unleashing the fiery demon Maligore. Seeking help from the Rangers, he is nonetheless taken by Divatox and so the Rangers pursue, upgrading their Zeo powers into Turbo powers in order to do so - to make things more epic, ordinary kid Justin Stewart becomes a new Blue Ranger as Rocky De Santos, currently Zeo Ranger 3: Blue, goes through a terrible issue in the movie's first few scenes that leaves him unable to join his teammates when they need to save the day and so Justin, via listening in on the gang's affairs and thus learning for himself who they are, ends up standing in for Rocky. In a pitched battle, they rescue Lerigot and defeat Maligore, with Divatox swearing revenge. The show picks up the story as Divatox arrives on Earth and begins to wreak havoc with her own Monster of the Week.

As the season progresses there are many changes to the team: Zordon and Alpha return to their home planet of Eltar in the show's premier and Dimitria, an alien with a mysterious connection to Divatox, and Alpha Six, her Jive Turkey robot assistant, stand in. Not long after, Tommy, Kat, Adam and Tanya, having recently graduated high school, each choose a successor to serve in their place on a new Turbo team as they move on from teenager lives into their futures: T.J., Cassie, Carlos and Ashley join Justin to fight Divatox's continuing threat.

The season concludes on, possibly, the biggest Downer Ending of a Season Finale in Power Rangers history: The team's Turbo and Rescue Megazords are destroyed, their weapons are lost, the Command Center/Power Chamber is blown up (again, but for good this time), and the Turbo powers vanish. The Rangers themselves are spared by a last minute summons for Divatox by the legendarily powerful Dark Specter, suggesting he is the Greater-Scope Villain behind all other enemies. Utterly defeated, the Rangers leave Justin behind and set off into outer space after Divatox.

This season is somewhat infamous among fans, mainly because its source material, Gekisou Sentai Carranger, was either a parody or backhanded satire (depending on the fan or Toei staff member you ask) of Super Sentai series. Despite this, the writers tried to give the season a serious tone in its first half, leading to jarring mood shifts when the stock footage was used. An episode will delve into the drama of Zordon and Alpha leaving to Eltar while Tommy reads his Zord's instruction manual in battle. Another polarizing point, the twelve-year-old Blue Ranger, cannot be blamed on Japanese footage; Saban's sister series Big Bad Beetleborgs utilized kid actors for their main characters, and the idea was to take that concept and move it to the mothership. Though it must be said there was a precedent for Kid Rangers in Super Sentai; both Kiba Ranger (White MMPR/Dairanger White) and King Ranger (Zeo Gold/Ohranger King) were children; and 20 years after Turbo, Toei would have another Kid Ranger with Koguma Skyblue in Uchuu Sentai Kyuranger.

Followed by Power Rangers in Space, a sequel that picks up where this series left off.

Did we ever tell you about that time they got baked into a pizza?
Feedback

Whenever Justin morphs into the Blue Turbo Ranger, he spontaneously grows into an adult body while retaining his child voice.

Whenever Justin morphs into the Blue Turbo Ranger, he spontaneously grows into an adult body while retaining his child voice.