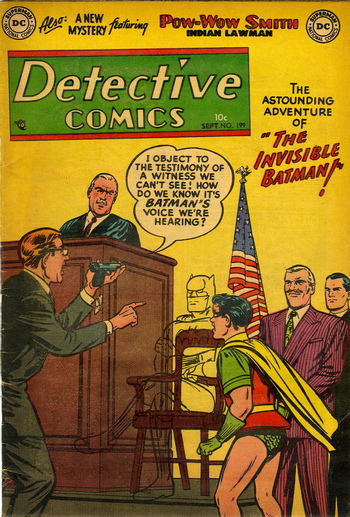 "I've dealt with people like this before: no personal ties, no strong beliefs, no particular interests. In fact, when you think about it this guy has the perfect profile. He was invisible before he was invisible."
— David Jenkins, Memoirs of an Invisible Man
Advertisement:

A work in which the main character is rendered tragically/comically invisible, and wackiness commences to ensue. This can be done to give the lead actor a small break so they can skip principal photography. It also allows an opportunity to give that character unexpected insights into his or her own character via the overheard statements of others, or to do things they wouldn't normally do.

In shows that lean toward comedy, the character will often play pranks on the other characters, often overhearing things they were not prepared for (such as supposed enemies expressing concern about the character being missing, or frustration at aspects of the character's personality).

If the show is geared toward a young adult or older audience, the invisibility will frequently not apply to clothing — this seems more common if the invisible character is female. If the character has done anything to deserve a karmic backlash during their invisibility, said invisibility will usually wear off at the worst possible time, and in front of the most people possible.

In one variation, characters are placed "out of phase" so they're imperceptible to anyone on the show, but still visible to the audience. They can walk through walls, but they don't fall through the floor. They can't eat, but can still breathe oxygen. Often, if the character is "out of phase," there is one other character (usually a guest star) who can see and/or hear them, but this character has a reputation for "seeing things" that aren't there or has been in a mental institution for years. This variation can be realized as an out-of-body or near-death experience.

See Invisibility for when this is a character power or otherwise longer than a one-shot storyline.