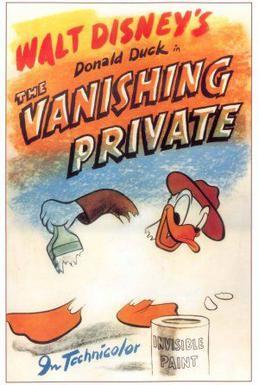 "Did you see a little guy... that you can't see?"
Advertisement:

"The Vanishing Private" is a 1942 Donald Duck cartoon with a story by Carl Barks and direction by Jack King; it is the second cartoon to depict Donald's misadventures in the U.S. Army during World War II.

Private Donald has been assigned to camouflage painting duty for the cannon on an artillery base, but his idea of camouflage is a loud colour scheme of red, yellow, and green stripes with black polka dots. The unimpressed Sergeant Pete tells Donald the point of camouflage is "to paint it so you can't see it!" and tells him to find some new paint. Donald wanders into the base's laboratory and discovers a vat of experimental invisible paint; "That'll work," he says, and carries the paint back to the cannon. When Pete sees the cannon seemingly missing, he initially assumes a Fifth Columnist has stolen it, so he is surprised when he bumps into it. He orders Donald, who is painting the inside of the cannon, to get out, and when Donald doesn't obey, Pete blows into the mouth of the cannon, sending Donald flying back into the invisible paint.

The now-invisible Donald flees his irate sergeant, but he soon decides to have some fun at Pete's expense. He skips around the base while singing "Here We Go Round the Mulberry Bush" as Pete tries to track him down, in the process convincing the General his odd behaviour is a sign of mental breakdown. As Donald's torment escalates, so does Pete's retaliation, until he is lobbing live grenades around; the General is now convinced Pete has gone completely mad from sunstroke, and when Donald pokes Pete in the backside with the General's sword, he drops his armload of grenades, which blow him and the General up.

Pete ends the cartoon in a straitjacket and a padded cell, pleading with his guard, the now-visible Donald, to tell the General he isn't crazy. "Do you think I'm crazy?" Donald answers with a smirk.

This sort provides examples of: