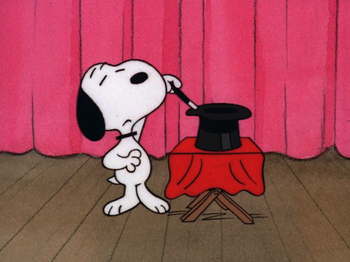 It's Magic, Charlie Brown is the 21st Peanuts special, first aired on April 28, 1981. It was later released as a bonus feature on the remastered deluxe DVD of It's the Great Pumpkin, Charlie Brown.
Advertisement:

Taking Charlie Brown's advice to take some books to read rather than just eating and sleeping, Snoopy heads off to the library with Charlie Brown's library card and purchases a magic book, and after having some fun testing out his newfound abilities (and getting his doghouse destroyed by the angry cat next door), he decides to put on a magic show, labeling himself "The Great Houndini", and performs several magic tricks (most of which do not succeed as expected), but when he turns Charlie Brown invisible and is about to revert him, a rainstorm occurs and ends the show early.

Charlie Brown laments his predicament, believing that he is now a lost soul condemned to roam the Earth, but he soon grows to enjoy his new state when he realizes he can successfully kick Lucy's football without her usual instinct to pull it away. This infuriates Lucy so much that she orders Snoopy to change him back, lest she pound him. Scared about this, Snoopy decides to get to work at Lucy's behest and tries to find something to help him revert Charlie Brown, before eventually perfecting it. Going out into a grassy field where Lucy has set up another place kick, he eventually blasts Charlie Brown with the counterspell, rendering him visible again (though he is too focused on kicking the football to realize). This allows Lucy to successfully pull the ball away, causing the now-visible Charlie Brown to fall flat on his back.

Not humiliated about that failure in the slightest, however, Charlie Brown declares that he finally kicked that football, despite Lucy arguing that he didn't. She then makes the mistake of insulting Snoopy, which offends him so much that he levitates her high into the air (just like what he did to her in the magic show), then dances back home with Charlie Brown. A few moments later, Linus comes by and lassoes Lucy by the leg with his blanket, pulling her back down, and also heads home along with her.

Despite being turned visible again and failing to kick the football this time, Charlie Brown still tells Lucy that he finally did it. Not believing him in the least bit, Lucy responds with this trope.

Example of:
Oh No You Didn't!

Despite being turned visible again and failing to kick the football this time, Charlie Brown still tells Lucy that he finally did it. Not believing him in the least bit, Lucy responds with this trope.