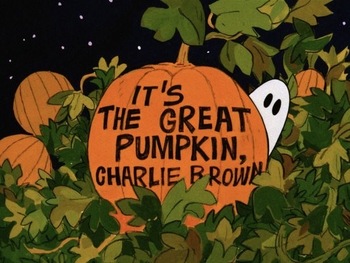 "Everyone tells me you are a fake, but I believe in you. P.S.: If you really are a fake, don't tell me. I don't want to know."
—Linus van Pelt
Advertisement:

This is not just a Halloween Special. This is the Halloween special.

It's the Great Pumpkin, Charlie Brown, based on the comic strip Peanuts by Charles Schulz, first aired on CBS in 1966. It was the second of the holiday-themed Peanuts specials following the sensation that was A Charlie Brown Christmas, and is nearly as beloved today.

As night falls on Halloween, Linus is headed for the local pumpkin patch and, he hopes, the arrival of the Great Pumpkin — a Halloween analogue to Santa Claus that only he believes in. While he and Charlie Brown's sister Sally (who has a crush on him) sit and wait for the Great Pumpkin, the other kids go trick-or-treating and attend a house party. Meanwhile, Snoopy is off on his own pretending to be a World War I flying ace.

Followed by You're in Love, Charlie Brown in 1967, although seasonally, it was followed (somewhat) by You're Not Elected, Charlie Brown, a 1972 special focusing on Linus's election campaign for class president in which he disastrously brings up the Great Pumpkin at a key moment. The two specials are paired together on some DVD releases, and from 2006 to 2019, ABC followed its annual re-broadcast of It's the Great Pumpkin... with an edited version of You're Not Elected... to make a full hour-long block; this also worked nicely as a tie-in to fall elections in the United States, which come about a week after Halloween. The 2004 children's book The Great Pumpkin Strikes Again! revisits the theme, this time with Peppermint Patty being talked into waiting in the pumpkin patch with Linus.

In 2020, this and other Peanuts specials moved to Apple TV+, which left Great Pumpkin to not be aired on linear TV that year for the first time since it was made. In 2021, the special would return to TV through a deal with PBS and PBS Kids.

This special was adapted into an island on Poptropica, with the same general plot.

It's the Great Tropes, Charlie Brown:

Example of:
I Got a Rock