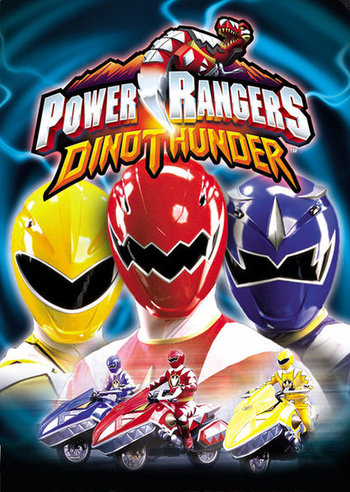 It's the first day of school in Reefside, and three students have already run afoul of the Sadist Teacher and are given detention. Thankfully, the new biology teacher doesn't want to be stuck with watching them, so he tells them that if they go out and bring back something prehistoric for his paleontology studies, he'll call it off. During their search, they stumble into a secret lab and decide to swipe some ancient-looking gemstones to fill the requirement.

The good news here is that the gems were infused with energies from the impact that wiped out the dinosaurs, and have already "bonded" with the students, giving them superpowers. The bad news is that a saurian Mad Scientist wants their power to start a new age of dinosaurs and is coming after the kids. The really bad news is that the gems are Loyal Phlebotinum, and taking their power requires killing the current hosts.

The really, really good news is that the new bio teacher is none other than Dr. Thomas James Oliver, known to his friends as "Tommy", and a man with a little experience with these matters.

Doug Sloan, Ann Austen, Jackie Marchand, and Jason David Frank all return in season 12 of Power Rangers, based on Bakuryuu Sentai Abaranger. The dinosaur motif apparently made everyone nostalgic and as the season also boasted the 500th episode (a clipshow episode where the show recapped each incarnation of the franchise in a condensed manner) and a rarity in the form of an episode of Abaranger, which was given a Gag Dub as far as being a show within a show.

The series is generally considered to be one of the strongest seasons of the Disney Era (alongside RPM) and up there with some of the most beloved seasons, with fun, strong characters and a wonderful team dynamic between them. It was far from free of problems, though: due to contract issues, Jason David Frank only really appeared in half of the season, with the character spending most of the season frozen in amber or invisible/only visible in morphed form.

But, come on, everyone knows Tommy is the most morphinomenal Ranger EVER.

Dino Thunder is the last Power Rangers season to date, and the only one of the Disney Era to have full team-ups with the preceding and succeeding seasons. Also of note is that this is the second Power Rangers season to only have one female Ranger. She more than made up for it, though, and appeared in the Milestone Celebration episode "Once A Ranger" as a representative of this season.

Dino Thunder was also the last to feature actor Pua Magasiva as Shane Clarke before his death in 2019.

It was followed by Power Rangers S.P.D..