Recap / Star Trek: The Next Generation S5E24 "The Next Phase" 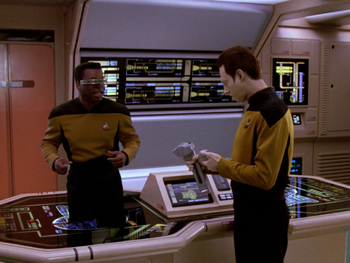 "If you're wondering how he sees and breathes and other science facts (la-la-la), then, repeat to yourself 'It's just a show, I should really just relax...'"
Advertisement:

The Enterprise arrives to answer the distress beacon of a Romulan vessel. Riker, Worf, La Forge and Ro beam aboard and, after a moment of tension, begin to assess the situation. Geordi determines that the graviton generator needs to be replaced, so he and Ro beam back to replicate a new one. On the way over, however, their patterns become unstable and they fail to materialize. It seems that they have disintegrated.

As the crew struggle to continue their duties while reacting to the apparent deaths of two crew members, Ro and Geordi wake on different parts of the ship. No one can see them, and they pass through solid objects. Ro immediately decides that they're dead, and this is the afterlife, but Geordi isn't convinced. Ro begins saying her goodbyes to the crew, though they cannot hear her, but eventually follows Geordi to the Romulan vessel as he searches for answers.

Geordi peaks into a computer terminal on the Romulan vessel and recognizes it as molecular phase inverter. When combined with a cloaking device, the inverter could cause matter to go out of phase, putting it in much the same position Geordi and Ro find themselves. This proves that the pair are still alive, just out of phase. Before they return to the ship, they overhear two Romulan officers plotting to sabotage the Enterprise's engines to make it explode when it next jumps to warp speed. Geordi and Ro now have to figure out a way to come back into phase before that happens. Little to they know, however, that they themselves are overheard by a Romulan who is out of phase just like they are.

Data begins scanning the ship for strange chroniton fields that have cropped up throughout the ship and nullifying them with anyons. Geordi quickly realizes that he and Ro are creating the fields whenever they pass through matter. When Data errantly passes anyons through Geordi's hand, it becomes slightly more solid. That's the solution he's been seeking: Geordi and Ro need to be doused in anyons to bring them back into phase.

While that is happening, Ro gets attacked by the out-of-phase Romulan, who is armed with an out-of-phase disruptor. They have a fight throughout the ship, passing through the private quarters of various crewmen who go about their lives oblivious to the fight. Finally, Geordi arrives and helps throw the Romulan through the ship's hull, sending him careening through empty space.

Geordi tells Ro the good news, and they head to Ten Forward, where Data has begun their funeral arrangements, to try to materialize long enough for someone to see them. After much consideration, Data has decided to host a funeral that is a celebration of Geordi and Ro's lives. The "deceased" pair begin touching and shooting at objects to flood the room with chronitons, but the resulting anyon blast is still too weak. Picard gets a call that the ship's next mission awaits them, so he prepares to have the ship jump to warp speed. As a last-ditch effort, Ro sets her out-of-phase disruptor to explode, creating a massive dose of chronitons. The crew responds with a commensurate dose of anyons, which cause Geordi and Ro to materialize just long enough to catch the attention of Data and Picard. Data finally is able to figure out what the chroniton fields actually were, and explains it to Picard.

Picard orders a sustained blast of anyons that finally brings Geordi and Ro back into phase. Geordi immediately orders the ship's engines offline, saving the ship from disaster. Afterwards, Geordi gorges himself on his own funeral's food, but Ro isn't hungry. She admits that her brush with the "afterlife" has made her appreciate her culture's religious beliefs more. Geordi jokes that they ought to try to create their own interphase device, since if it can teach Ro humility, then it can do anything. They both laugh.

Tropes provided by "The Next Phase":