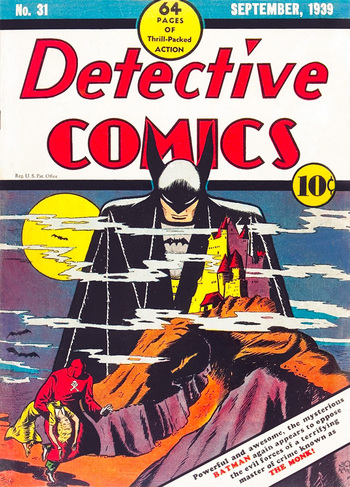 Detective Comics debuted in 1937 and is the longest continually published comic book in the United States.note Action Comics had higher issue numbers because it went weekly for a while, but started a few months later. It is published by DC Comics (and is the origin of the "DC" in the company's name), and is best known for telling the adventures of Batman, who debuted in issue #27 with the story "The Case of the Chemical Syndicate".

The comic started out as an anthology comic with each issue containing several unrelated adventures. The first issue introduced a mix of two-fisted sleuths with names like "Slam" Bradley and "Speed" Saunders as well as more exotic detectives like "Cosmo, the Phantom of Disguise". Slam Bradley, one of the title's early stars, was created (from an initial character outline by the editor, Malcolm Wheeler-Nicholson) by Jerry Siegel and Joe Shuster, not yet famous as the creators of Superman. He still shows up in DC Comics from time to time, usually when a writer wants to make a point about how comics have changed over the years.

Issue #27 featured the first appearance of a costumed vigilante called the Bat-Man, who became the comic's new star. Over time, Detective Comics transitioned from its anthology format to a series entirely about Batman and his associates.

The series has gone through several different incarnations over the years. In 1978, when on the verge of cancellation, it was merged with the comic title Batman Family. Over 1981-1986 the series had the same writers as the main Batman title and the two were in permanent crossover, essentially functioning as a single series published twice-monthly. Following the Batman: No Man's Land crossover story, Detective Comics was distinguished from the other Batman titles by its focus on smaller-scale and more realistic detective stories. In 2009-2010, during a period where Batman was supposedly dead, Batwoman temporarily became the headline character, reverting back to Batman when he returned.

The book reached issue #881 before being renumbered with a new #1 for DC's 2011 New 52 relaunch. After issue #52, as part of the DC Rebirth initiative, the old numbering resumed with #934. Over issues #934-981 the series became a Batfamily team book, which has its own page. Later, a five-issue arc called "On the Outside" written by Bryan Hill acted as a soft-launch for Hill's new Batman and the Outsiders ongoing series. The series has since returned to mainly focusing on Batman himself.

With the DC Infinite Frontier relaunch in 2021, as of issue #1034 the series is written by Mariko Tamaki.

Detective Comics story arcs with their own pages include:

Tropes found in other issues of Detective Comics include: