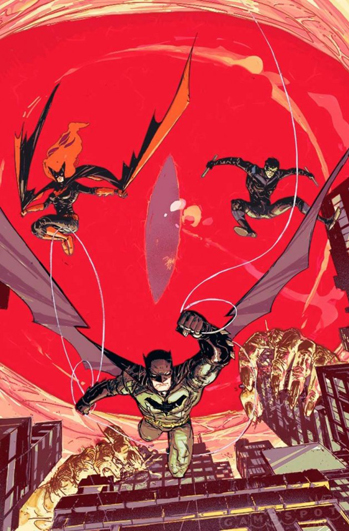 On the night a massive hurricane is to make landfall, Batman, Batwoman, Nightwing, and others are preparing to help evacuate Gotham citizens to safety. However, giant, mutated monsters begin springing up all over the city and wreaking havoc. The team must not only get citizens to safety before the storm hits, but also neutralize several monsters before they can cause too much damage. And on top of this, they must develop a cure to stop others from mutating as well.

The crossover is not split up by title; that is, the Nightwing issues of the story don't focus primarily on Nightwing, for example. Instead, the story is presented linearly through the titles, rotating through Batman, Nightwing, and Detective Comics, and then repeating that order once.

The exact issues involved in the crossover are:

The crossover was scripted and guided by Steve Orlando, with input from Tom King, Tim Seeley, and James Tynion IV (the writers of each of the series involved) to make sure continuity and storylines for the individual titles stayed straight. New artists were also brought in just for the event: Riley Rossmo for Batman, Roge Antonio for Nightwing, and Andy MacDonald for Detective Comics.

Night of the Monster Men contains examples of: