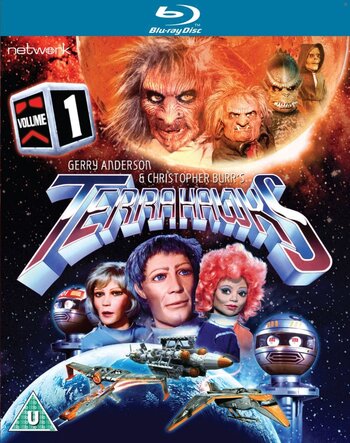 "Terrahawks! Stay on this channel! This is an emergency!"
Advertisement:

Terrahawks is a show produced by Gerry Anderson and Christopher Burr in the mid-1980s, using a process dubbed Supermacromation rather than his trademark Supermarionation. Essentially, the puppets here are operated from below with techniques developed by Jim Henson and his Creature Shop crew.

In the year 2020 the alien android Zelda attacks an outpost on Mars and makes it her home base in her efforts to destroy humankind and take over the Earth. To stop her, the Earth employs an elite task force known as the Terrahawks, who pilot an array of exotic aircraft into battle against Zelda's minions.

In August 2019, it was revealed that an all-new television series, Kate Kestrel and The Terrahawks, was in development.